We are a group of students, brought together around the desire to create independent audiovisual projects, with the means at our disposal. Coming from different backgrounds, we are able to learn from each other, and share our different points of view on the world.

Our adventure began in 2016, when we first took part in 48 Hour Film Project in Tours, taking home the Best Music Award for our short film "Dissension". We have made several short films and a web-series. We are now in post-production for the most ambitious project we have ever started, the musical film, By the Shadow of the Lake [À L’Ombre du lac]. 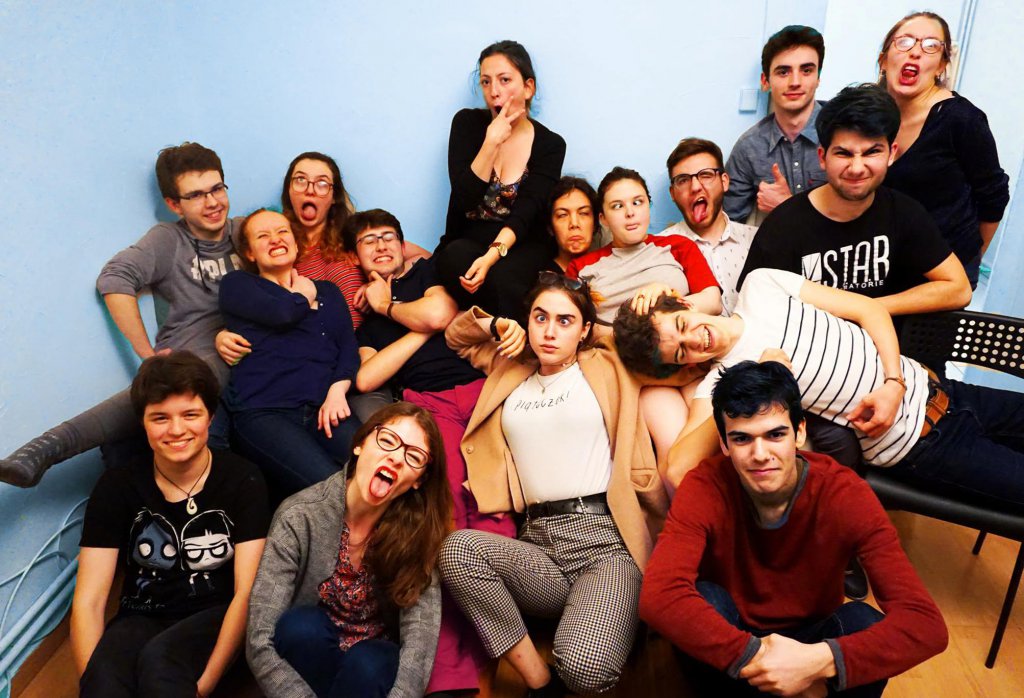 By the Shadow of the Lake tells the story of Suzanne Rosemont du Lac, an ambitious young woman of the early twentieth century. While she is in India, negotiating the price of spices for the family’s company, she receives a telegram from her father. The latter informs her of the failure of a commercial partnership, causing the considerable weakening of their financial means.

Suzanne is thus obliged to return to France, where her father evades her from the company in order to reintegrate her into society life. Suzanne’s parents want to marry her to André, the son of a newly rich family. At the reception where Suzanne meets André, two other characters burst into his life. David, a doctor and childhood friend of André, promises him a future of travel and freedom. Marianne, André’s elder sister, shares a passion for art with Suzanne, and quickly falls under her spell.

The first 3 Furies feature film, a musical, epoch film ... By the Shadow of the Lake is an ambitious and demanding project, involving work from a lot of collaborators.

This period film takes place in 1905, and deals with still quite current society issues, particularly the place of women in a constrained but privileged society. 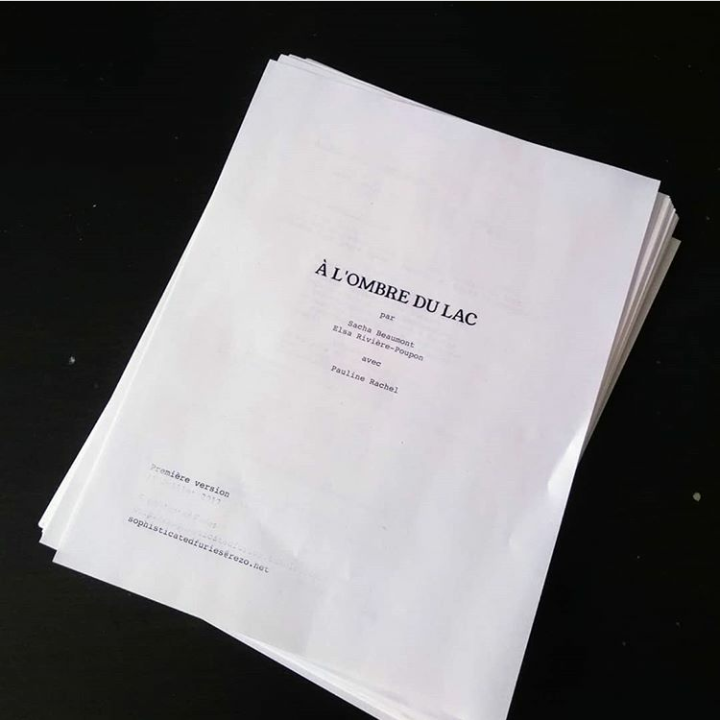 Our crowdfunding is online until the end of the shoot so you can keep donating!

The team of the film "By the Shadow of the Lake"

Alaia discovered theater at 10. After a few musical theatre workshops in California, she decided to enroll in Cours Florent for Musical in 2014. This training led her to practice both singing and acting, but she also took part in some productions as a makeup artist . A comedian, a singer and full of humor, she has overflowing energy.

Margaux Heller, a young actress, discovered the stage at the age of 12, and followed a theatrical training at the Conservatoire Regional de Cannes while also studying. In 2012, she became a professional actress by enrolling at the Cours Florent which she graduated from in 2014. Also relying on a solid background in dance and musicals, Margaux Heller is a complete multidisciplinary artist. An author, a composer and a performer, she is now working on her second album.

Vincent Serrano in the role of André

Vincent has an unusual training: in 2010, he graduated from Actors College of Theatre and TV, in Sydney, Australia. He then took acting classes in the United States, before studying scriptwriting in France. A comedian, but also an author, he was in many short films and on stage.

Fabien Ara in the role of David

After having participated in numerous internships (actors studio, "casting" Pygmalion) and graduated from the Florent classes, Fabien took part to many productions: you can find him much on stage as an actor or a director, on television (in series like working girls or our dear neighbors) and on the silver screen, in productions ranging from Tuches 3 to Is this now (for which he earned the award for an Actor in a Leading Role at the IndieFEST Film Awards 2017), Fabien is a versatile actor.

After a few years of theater at the Wish Association, she began shooting videos for various occasions. She began making short fiction films in 2013, which led her to participate to the 48HFP for the first time in 2015. In 2016, she created the collective "3 Furies".

After studying Cinema and Audiovisual for two years at the Paris III - Sorbonne Nouvelle University, she finished her bachelor at the City College of New York, in film production.

Sacha began started playing music in 2004, at the conservatory of Blois: she was first enrolled in violin and musical training, then took classes in piano, choral and orchestra. She now practices lyrical singing in the vocal ensemble Lumen Laulu. She also began theater in 2005, playing in various companies and passing her literary baccalaureate with theater option. She now plays with the Collectif du Grand Sot.

In 2007, she enrolled at the summer musical comedy workshop with La Musique de Léonie, where she met Elsa Rivière-Poupon and Madeleine Paux. This brought Sacha to participate in the first creation of La Fabrique Opéra Val de Loire, singing in the choir of Carmen, as well as those of the musical My Fair Lady.

She joined 3 Furies in 2016 with Sweet Sweet Paris, then became a recurring actress, producer, scriptwriter, and now director. She is currently a studying Lettres Modernes at the University François Rabelais of Tours, where she also takes an Scenic Arts class.

The Mézière Castle was the home of the same family since 1893. This castle, situated in the Loir Valley, is built on a Gallo-Roman city hence its name "Mézière". It belonged to the family of Taillevis for generations. Raphael de Taillevis was a physician and friend of the King of Navarre, Antoine de Bourbon, Duke of Vendome, father of Henry IV. The King of Navarre and Jeanne d’Albret were married in Moulins (Allier) and came into wedlock in the Vendômois. They regularly came to the Mézière castle. The poet Ronsard found the opportunity to compose a poem filled with delicacy following this royal event. With time passing, the castle has changed. It retains all its charm, with its small chapel, carved porch (1555) and fireplaces encrusted with slates as in Chambord.

Jasmine was always passionate about fashion and costumes, covering page after page with designs of princess dresses and spy outfits ever since she learned how to hold a pen. In 2015, through cosplay, she went from paper to cloth, and learned to sew so she could turn her dream costumes into reality.

Mathieu Bolcato is a saxophonist, singer, choirmaster and composer. He currently conducts the vocal ensemble Lumen Laulu (1st prize in the national competition of the Florilège Vocal de Tours). He is the assistant choir conductor of Mikrokosmos (Grand Prix of the Tolosa International Competition), and plays in the saxophone ensemble Val de Sax. He has written many compositions for voice, ranging from melodies with piano to pieces for a large mixed choir. He also took part in the writing of the score for the video game Luor, developed by Clément Willay.

Located in the heart of the Loire Valley, this beautiful property is the ideal place to stay for relaxation, sightseeing, and complete immersion into the French culture. La Vaudouriere is a very special historic property once owned by Joseph-Alexandre de Musset, the grandfather of the 19th century poet Alfred de Musset. Alfred’s father and all his siblings were born at la Vaudouriere, which also served as hunting grounds, and baptized at the church in Lunay located approximately 4 km (2.5 miles) from the domain.

Born in 1974, Pierre Lambla studied at the CNR Strasbourg. After starting to play the violin, he changed to the classical saxophone before completing his history of music and direction of wind ensembles and tuba degree. It is in the heart of the Loir Valley where he settled, that he assembled a home / studio / laboratory of semi-troglodyte sound experiments. Pierre Lambla is also a music teacher involved with local schools. He regularly teaches in the form of workshops dealing with improvisation, the technique of wind instruments and the practice of musical theater.

Exhibition at the Mézière Castle 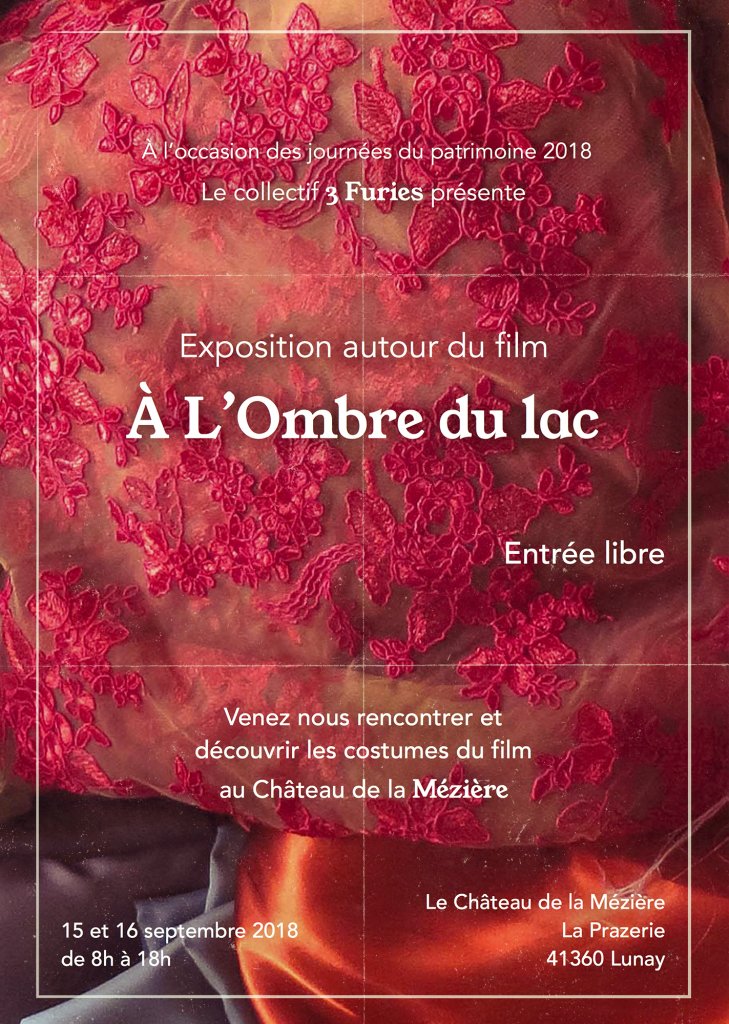 Article in La Nouvelle République about the exhibition: 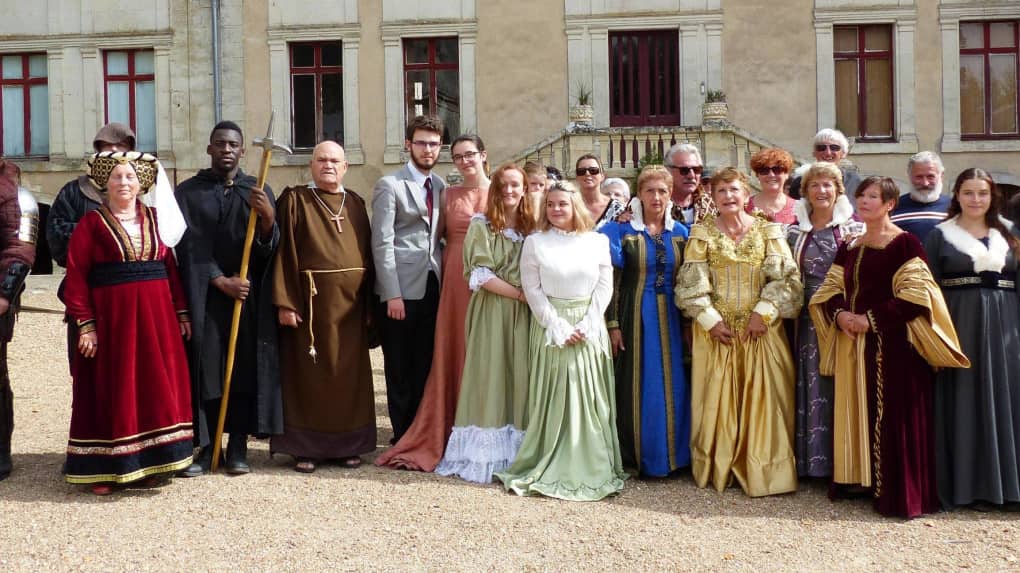 The shooting of our first feature film, By the Shadow of the Lake [À L’Ombre du lac], was completed on August 2, 2018. We would like to thank our entire team of volunteers who struggled to bring this project to life, our partners, our donors without whom nothing would have been possible, and to all those who, in a way or another, supported us. 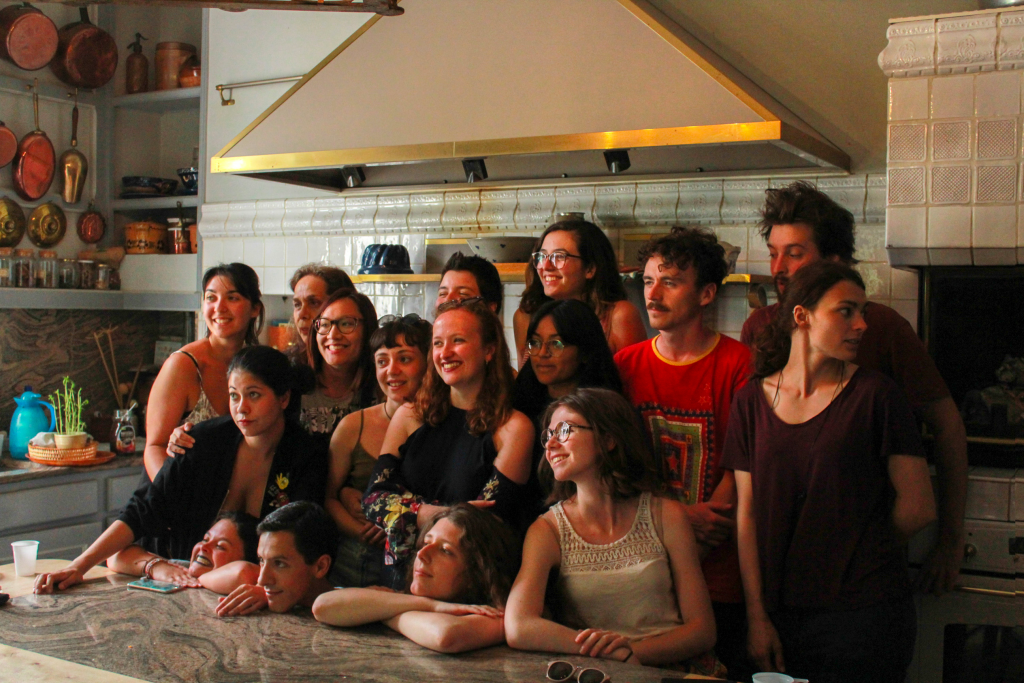 Article in Le Petit Vendômois by Alexandre Fleury, about By the Shadow of the Lake, 16 June 2018 https://lepetitvendomois.fr/actualites/graine-de-stars/ 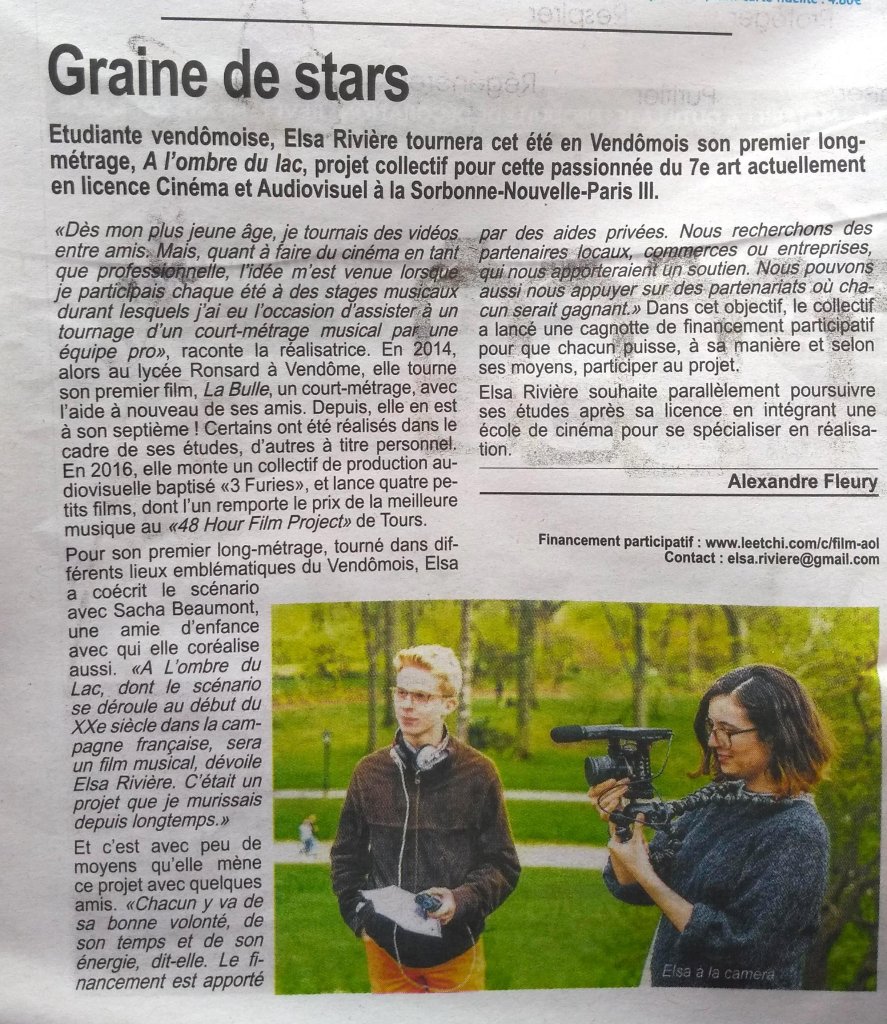 Article in La Nouvelle République by Claude Defresne, about By the Shadow of the Lake, 8 July 2018 https://www.lanouvellerepublique.fr/vendome/elsa-et-sacha-tournent-a-l-ombre-du-lac

The production of our film is completely independent, managed in an associative way and entirely operated by volunteers. Technicians and comedians all work on the film in their spare time, but we still need quite large funds, so we can rent the equipment needed to ensure the best quality, as well as allow our team to work in the best conditions. 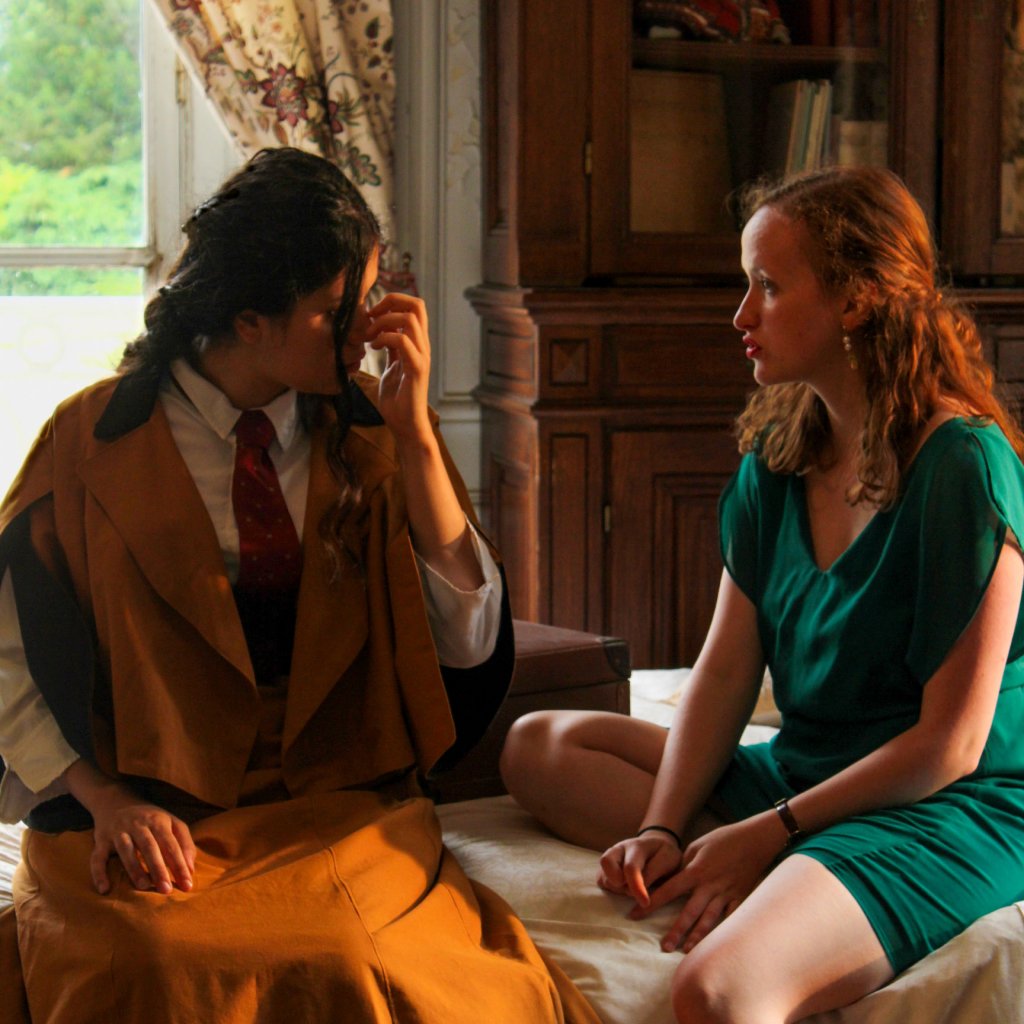 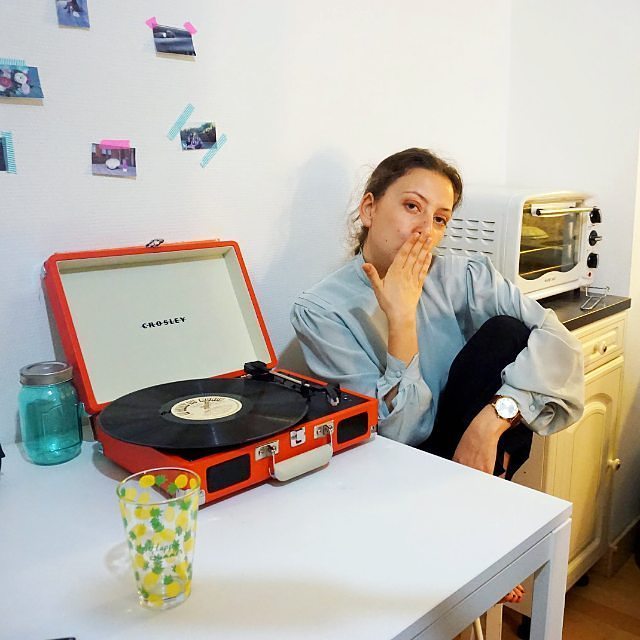 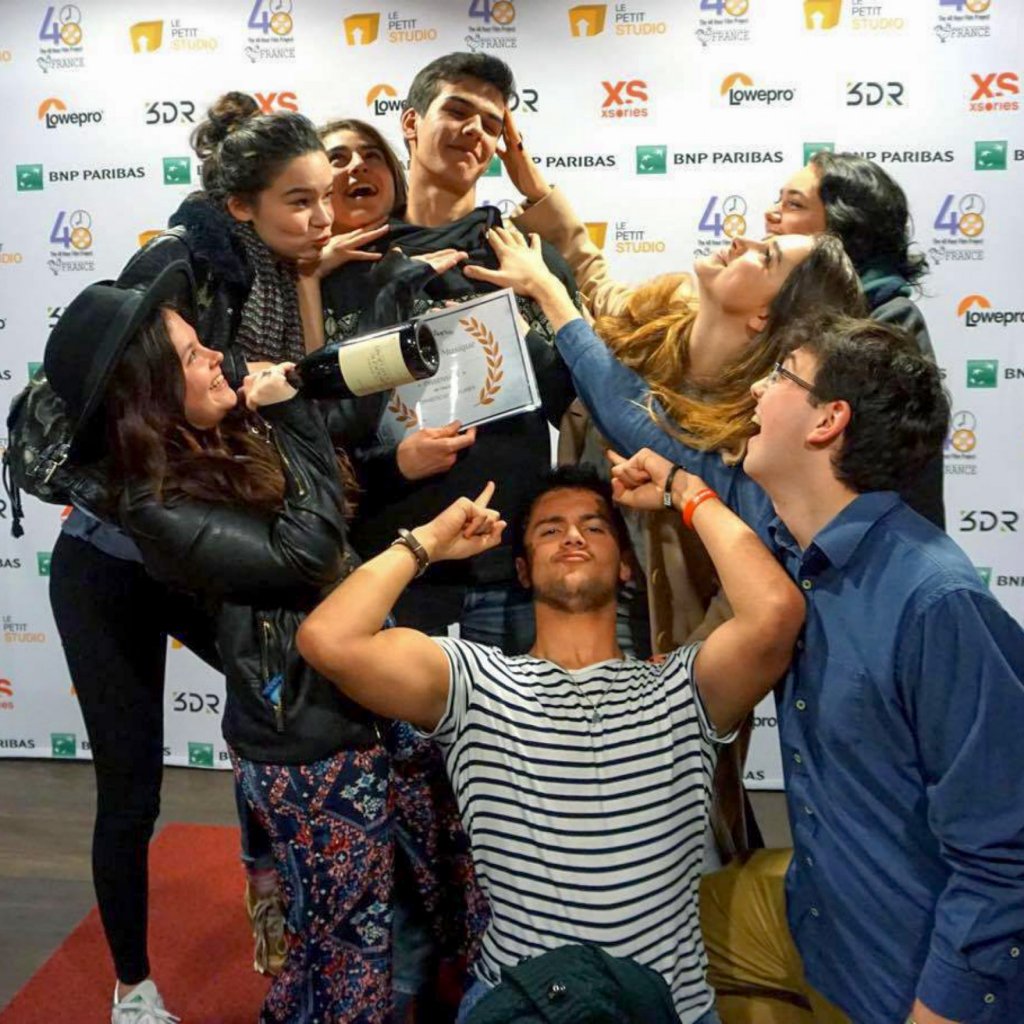 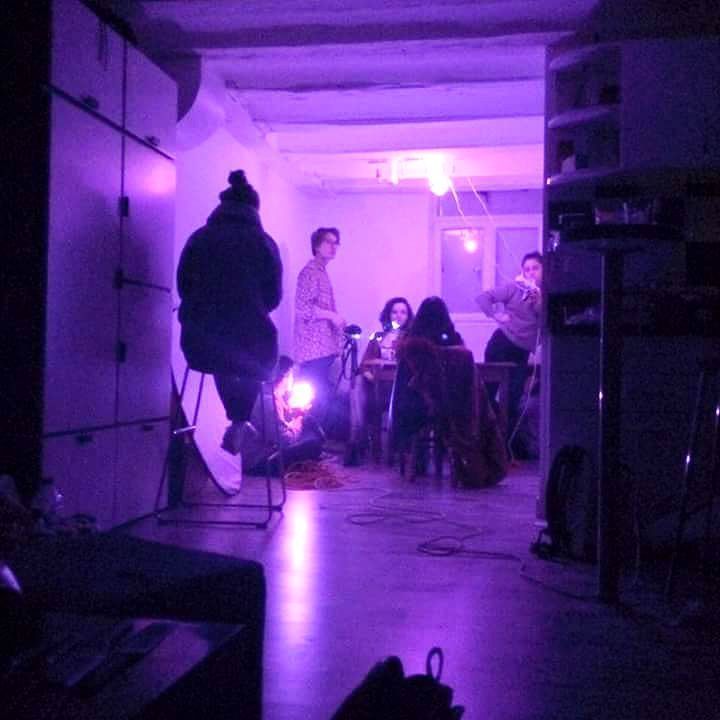 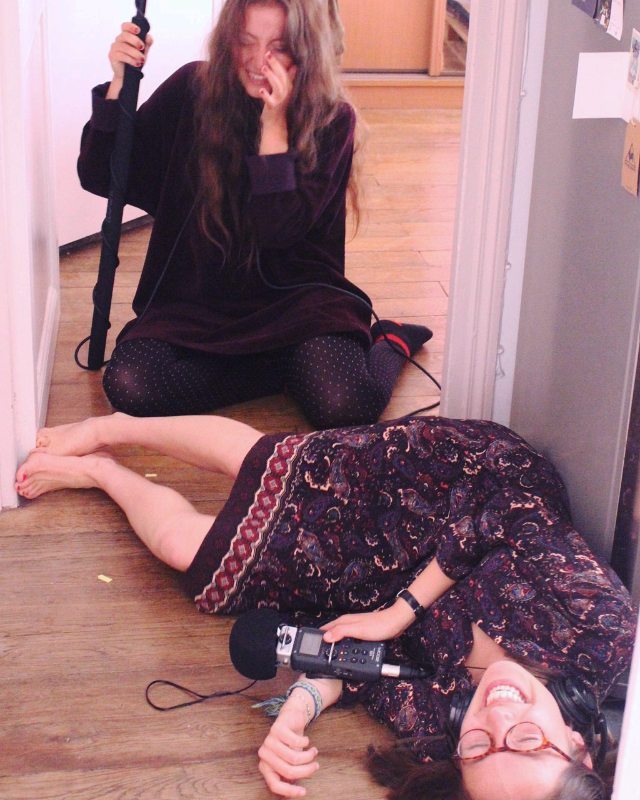 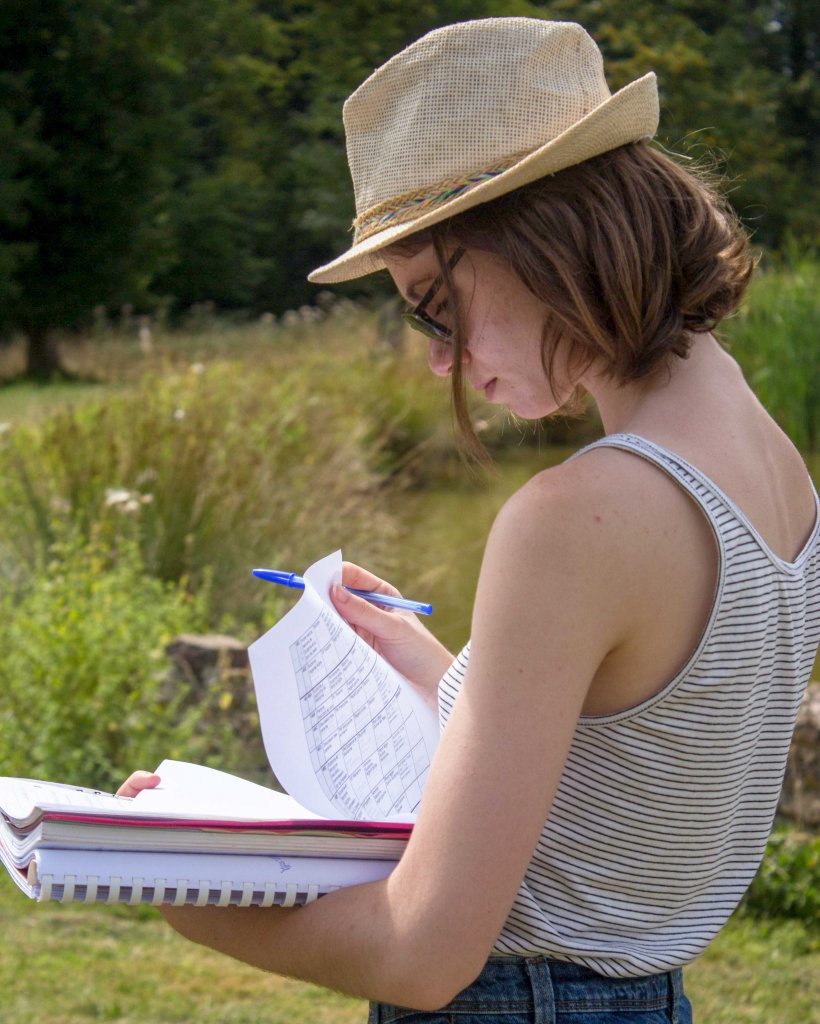 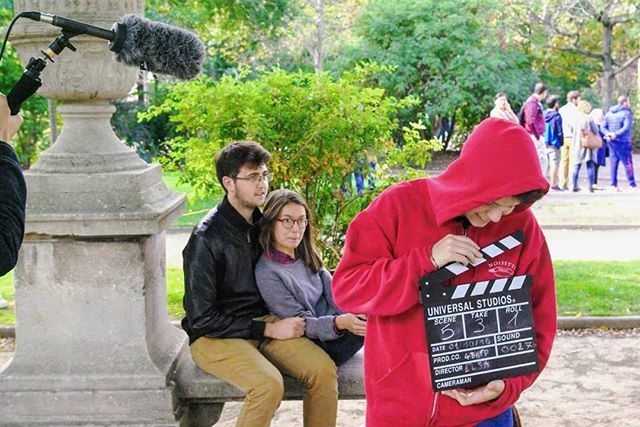 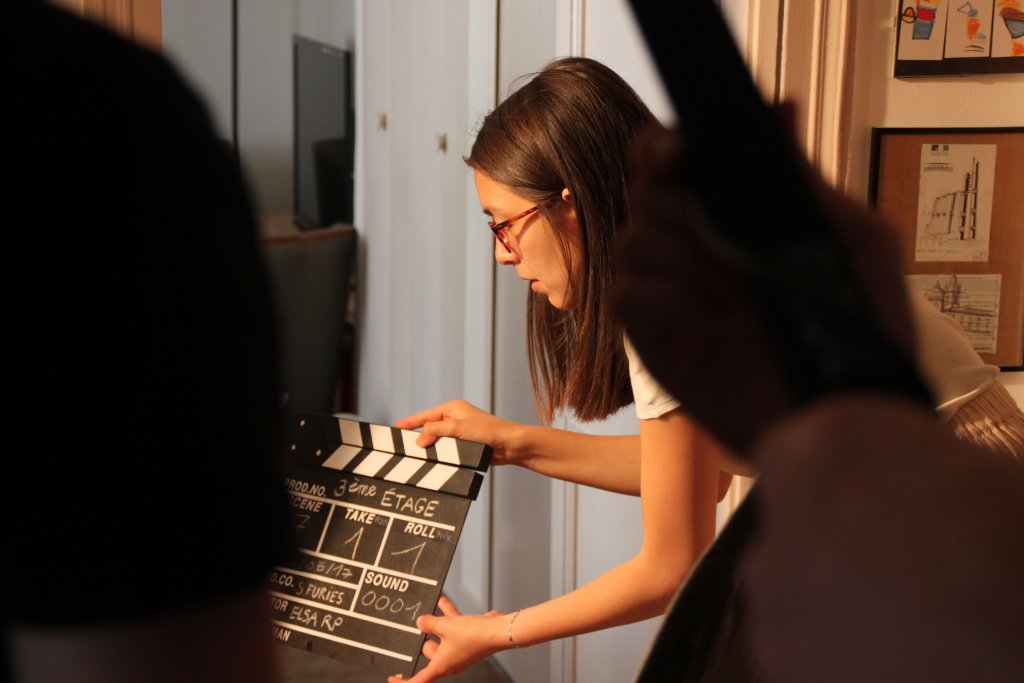 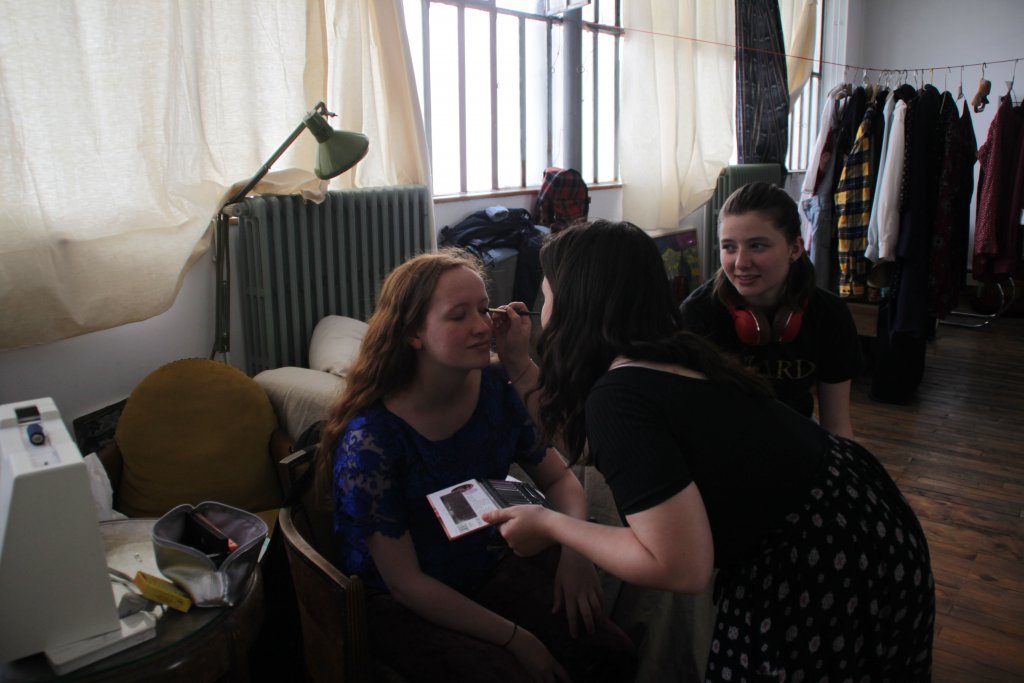 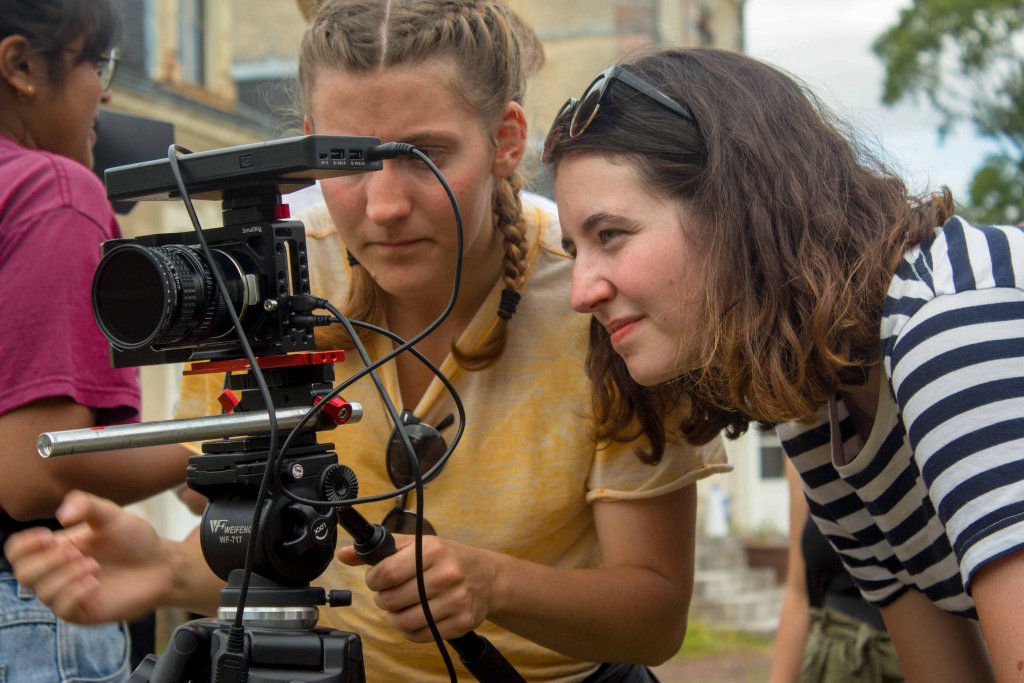